Docker is a great tool, and seems simple to use when we just begin with an application, packaged inside a container. However, in real usecase, there will be so many complex situations, where a solution need multiple contains linking together, especially with multi-tiers application. Today we will go deeply about how Docker containers can connect to others while running, and how can we setup interactive, dynamcally linkage between containers for development and migration.

We have at least 3 ways for connecting containers:

This should be the most simple way to enable communication between Docker containers. Let’s say we have two container:

The advantages are simplicification process and we just pass port parameters to run command, but disadvantages are application will be bound to a specific port, and this is not dynamic since application must expose through a TCP/IP.

The general idea is that you specify a single name for your database (or any other service) and update a short-lived DNS server with the actual IP as you start and stop containers. Then the container should always point to a domain, and the DNS server will redirect that domain to container actual IP Address which it had when it started.

A good example is SkyDock. It works with two docker containers, the DNS server and a monitor that keeps it updated automatically.

Docker creates a special Linux bridge called docker0 on startup. All containers are automatically connected to this bridge and the IP subnet for all containers is randomly set by Docker. Currently, it is not possible to directly influence the particular IP address of a Docker container. Luckily, there is a shell script pipework which you can use to add another interface to a container with a specified IP address.

adds the interface eth1 with IP address 10.2.0.11 to the last started container. 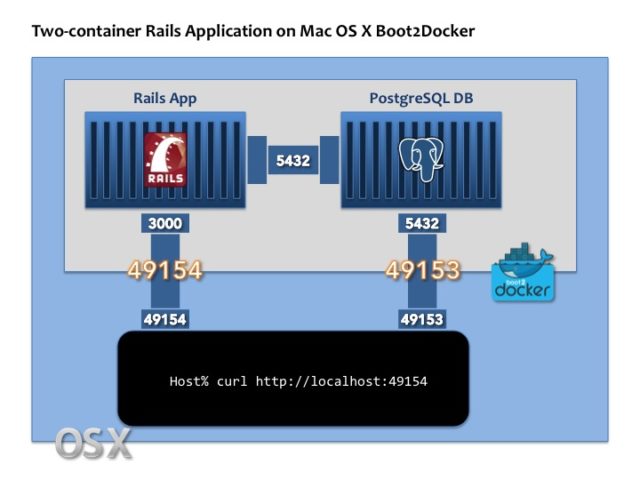 Docker supports native linking between containers by refering to their names. We can get random name while running a container, or we can manually set a name for the container. Docker links automatically propagate exposed ports of one container as shell variables to another container. In this way, the second container can dynamically adjust network settings upon startup without the need to modify an image nor configurations.

Later, we start another container and allow linking like this:

All variables are accessible from within linking container. So our webapp has all those available params. We will have a Dockerfile just like:

and then, the container will automatically pass the correct network information.

Rather than hardcoding network links between a service consumer and provider, Docker encourages service portability, for example instead of:

Requiring you to restart the consumer to attach it to a different redisservice, you can add ambassadors:

We will discuss about ambassador in next post, and will try to deploy a web app with web-service layer using all three ways above.

It has been a long time since my last blog, the world has seen lots of changes, including technology innovation, pandemic and especially the way we communicate with each other and with digital product. This post is brief to the journey for one of our product which we involved a

Hello 2017, hope everyone will have an interesting year ahead. It has been a long time since last post of us, due to several personal stuffs. So today, I would like to come back, and with a very first news about CodenTrick: We have transformed our WordPress instance into a